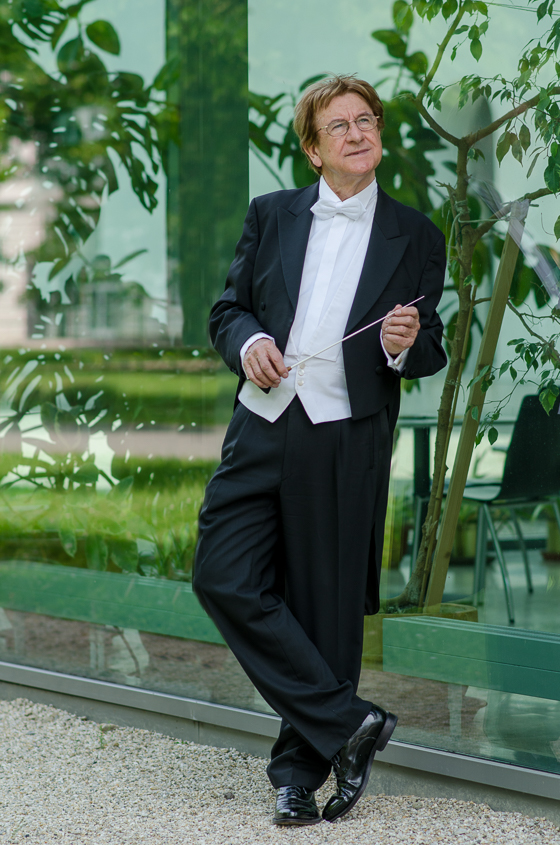 Kurt Schmid was born 1942 in Vienna in the family of musicians. 1963 he graduated with distinction from the University of Music in Vienna where he studied clarinet with Prof. Rudolf Jettel. His teachers of composition were Hans Swarowsky, Walter Koberer, Karl Österreicher, Erwin Ačel and Seiji Ozawa.

After the graduation he got a job of a solo clarinettist at the “Tonkünstler” Orchestra of Lower Austria where he worked until 2003.
At the same time he played with several musical groups like „Viennese Concert Schrammel Quartet“ and chamber ensemble “Kollegium Viennese” and started to compose.
1970 Kurt Schmid began regular teaching activity, 1974 he became a teacher at the Vienna Music Seminar, 1980 – at the University of Music in Vienna. He regularly holds master-classes in Austria, Japan, Korea and Ukraine.
1993 maestro was appointed artistic director and conductor of the “Vienna Clarinet Orchestra” with which he first performed his compositions. 1995 he became an artistic Vice-President of the Vienna Music Seminar and 1996 – the Music Director of the “Euro Music Festival” in Korea.

1998 he founded his “Strauss-Gala-Orchestra Vienna” with which he is regularly playing on tour in Japan and giving concerts in Austria, Spain, Belgium and other countries.
Since 1999 Kurt Schmid is honorary director and conductor of the Symphony Orchestra of the State Philharmony Oradea (Rumania), conductor and organizer of concerts in Japan, Korea, Hungary and Rumania.
2001 maestro starts his concert activity in Ukraine – he conducts concerts in Lvov, Uzhhorod, Chernivtsi, Kiev, Kharkov, Dnipropetrovsk, Lugansk, Nikolaev, Kherson, Odessa, Simferopol, Yalta and other cities.
2002 he became a honorary conductor of the Philharmonic Society in Chernivtsi, art director and 1st conductor of the Symphonic Orchestra of the Philharmony Lugansk. He also received the silver medal of honour from the capital city of Vienna.

Big achievements of Kurt Schmid were numerous concert tours of the Symphonic Orchestra of the Philharmony Lugansk in Austria. The most important of them were the performances of the orchestra in the Big Hall of the Viennese Konzerthaus, where Ukrainian music and masterpieces of the Viennese music were played, as well as the performance in October 2005 in the Golden Hall of the Wiener Musikverein, where orchestra together with the choir of the the Lugansk National Pedagogical University performed the 9th Symphony of Beethoven. One of the summits of the collaboration of Kurt Schmid with orchestra and choir was the concert tour through Austria with Requiem of Mozart and Ukrainian music.
During his work in Lugansk a lot of pieces were first played for Lugansk audience: among them is the 9th Symphony of Beethoven, Carmina Burana of Carl Orff, Stabat Mater of Pergolesi and others.
Since December 2003 he is teaching at the Lugansk National Pedagogical University. 2004 Kurt Schmid got the title „Dr. honoris causa” of this university.

November 2005 Kurt Schmid got the honorary prize of the international popularity fond „Gold fortune“ (Ukraine). June 2006 he was awarded a medal of the 3rd degree “For the important contribution to the cultural development of the Lugansk region”.

2010 he has got the Austrian Cross of Honour for Science and Art – the highest award of Austria that can be granted for outstanding achievements in the field of art and science.

2017 he conducts concerts with the Academic Symphony Orchestra Lugansk/Ukraine in Linz, Salzburg, Grieskirchen, Vienna and Hollabrunn.

2019 a benefit concert with his music and lyrics written by Elisabeth and Peter Kotauczek was held in the Mozart Hall of the Vienna Konzerthaus.

2020 he was elected as the President of the Wiener MusikSeminar.

2021 he was appointed as the Vice-President of the Lower Austrian Mozart Community.

2022 Maestro Schmid got the order of the City Severodonetsk in recognition of his artistic activity with the Academic Symphony Orchestra in the Lugansk region.

Kurt Schmid has written more than 753 Operas. The summit of his activity as a composer was the performance of his ballet “The Fire Flower” in the Museumsquartier in Vienna in August 2007. The other important event was the benefit concert of his compositions in the Redoutensaal of the Viennese Hofburg in October 2008. In August 2010 his new Double-CD “Emotion – Inspiration” was presented in the Minoriten Church in Vienna. In October 2011 his Oratorio “Ode to the Joy” with lyrics written by Elisabeth Kotauczek was premiered in the Wiener Konzerthaus. His concert-tale “Pegasus” with lyrics by Elisabeth Kotauczek was published in 2014.